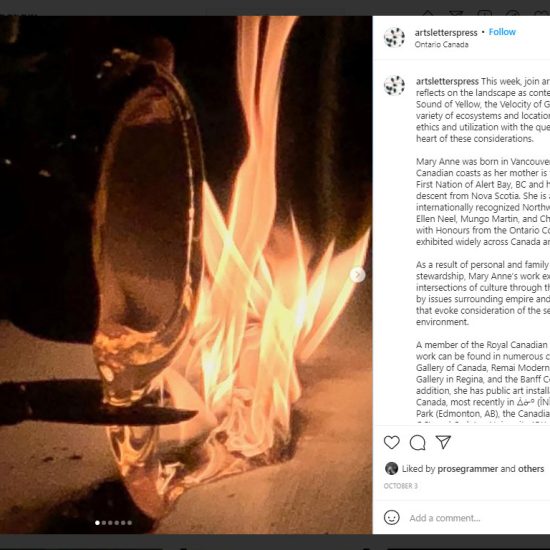 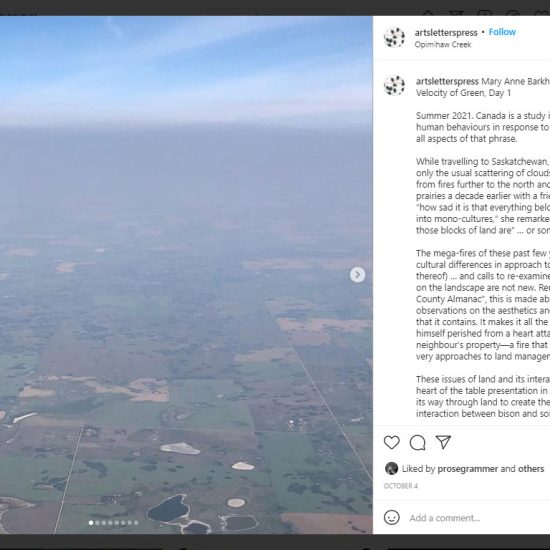 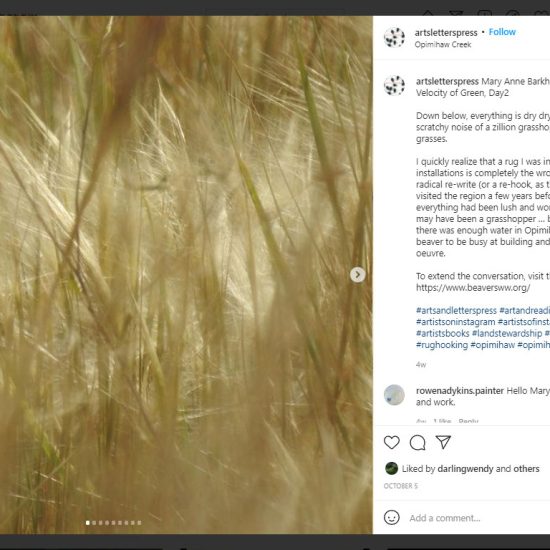 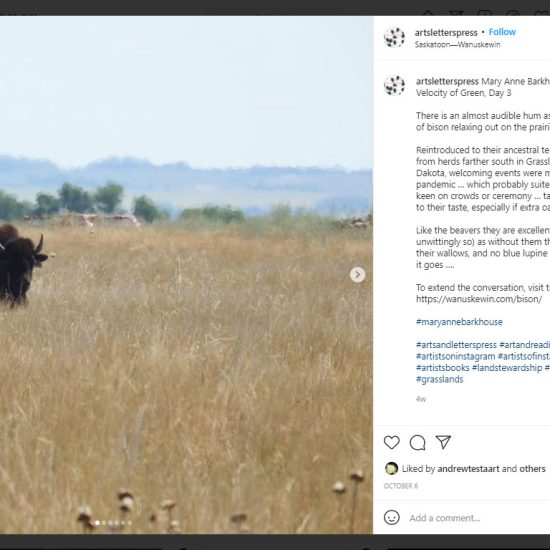 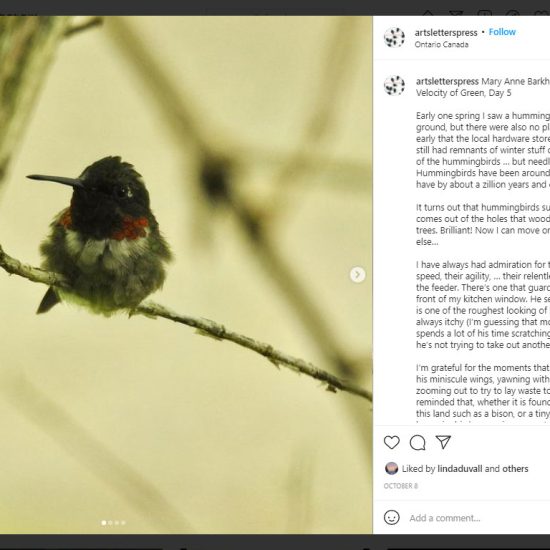 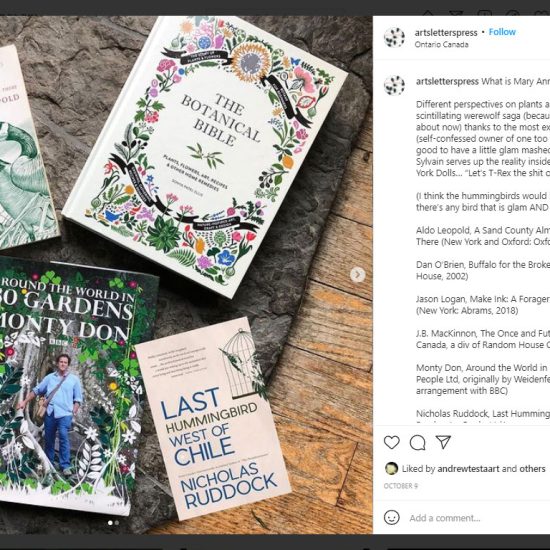 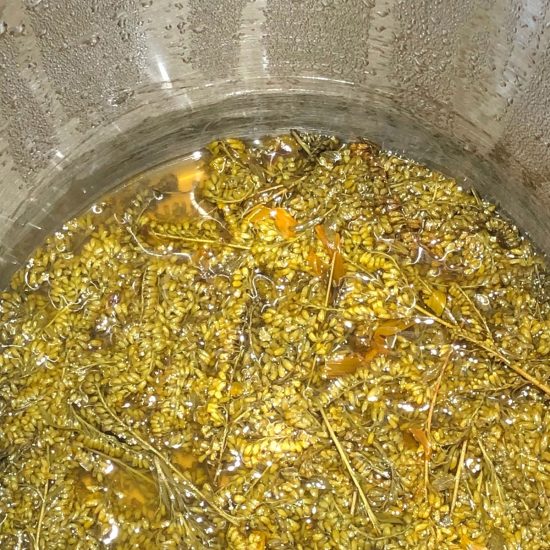 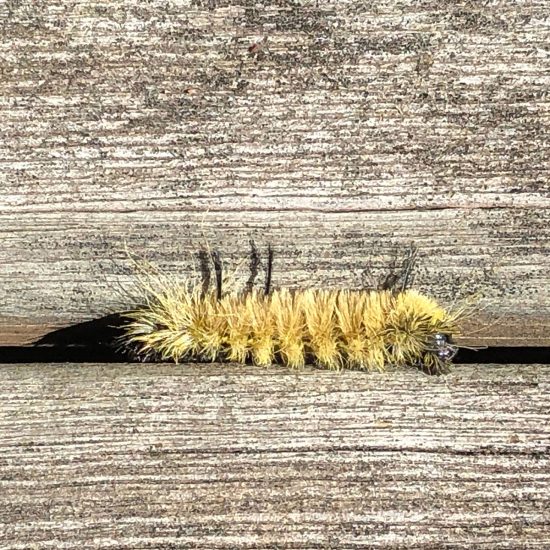 This week, join artist Mary Anne Barkhouse as she reflects on the landscape as contested space for her project “The Sound of Yellow, the Velocity of Green”. Using images from a variety of ecosystems and locations, the artist explores ideas of land ethics and utilization with the question “whose garden is it?” at the heart of these considerations.

Summer 2021. Canada is a study in discrepancies in climate and human behaviours in response to adversity. Life in the hot zone—in all aspects of that phrase.

While travelling to Saskatchewan, the aircraft pierced through not only the usual scattering of clouds, but also a thick layer of ash from fires further to the north and west. I remember flying over the prairies a decade earlier with a friend. Just as I was about to say, “how sad it is that everything below is all chopped up and confined into mono-cultures,” she remarked cheerily, “look how wonderful all those blocks of land are” … or something to the effect.

The mega-fires of these past few years have underscored the cultural differences in approach to land stewardship (or lack thereof) … and calls to re-examine traditional methods of using fire on the landscape are not new. Rereading Aldo Leopold’s “A Sand County Almanac”, this is made abundantly clear through his observations on the aesthetics and ethics regarding land and all that it contains. It makes it all the more tragic, then, that Leopold himself perished from a heart attack while battling a wildfire on his neighbour’s property—a fire that may have been mitigated by the very approaches to land management of which he was an advocate.

These issues of land and its interactions with species are at the heart of the table presentation in Opimihaw. The water that chewed its way through land to create the valleys that we see today, the interaction between bison and soil, between fire, wood, and grass.

Down below, everything is dry dry dry, the air alive with the scratchy noise of a zillion grasshoppers springing through scorched grasses.

I quickly realize that a rug I was intending for one of my installations is completely the wrong colours … necessitating a radical re-write (or a re-hook, as the case may be). When I had visited the region a few years before, at the exact week and season, everything had been lush and wonderfully whispery green. There may have been a grasshopper … but I put that in the singular. And there was enough water in Opimihaw Creek for an ambitious beaver to be busy at building and designing its next architectural oeuvre.

To extend the conversation, visit the link in our bio: https://www.beaversww.org/

There is an almost audible hum as the heat shimmers off the backs of bison relaxing out on the prairie.

Reintroduced to their ancestral territory at Wanuskewin last year from herds farther south in Grasslands National Park and South Dakota, welcoming events were modest on account of the pandemic … which probably suited the bison just fine. They aren’t keen on crowds or ceremony … tall grass and empty space is more to their taste, especially if extra oats are thrown into the equation.

Like the beavers they are excellent caretakers of their garden (again unwittingly so) as without them there is no blue lupine to garnish their wallows, and no blue lupine means fewer butterflies … and so it goes ….

To extend the conversation, visit the link in our bio: https://wanuskewin.com/bison/

Back home in Ontario, it seems almost unfair that everything is so green. When it rains, I think of animals out west that would be grateful for a few drops of moisture that don’t immediately evaporate upon hitting the ground. I hear that farmers in Nova Scotia are getting not two, not three, but four cuts of hay this summer. Exhibiting the generosity of spirit that is typical of Maritimers, farmers, and gardeners, they are organizing a drive to get the hay out west where it is desperately needed.

Trying to take advantage of the season, I collect golden rod to make a batch of ink for an upcoming project. Each plant, I have found, is like a condominium—prime real estate for creatures such as the aptly named Golden Rod Spider, a selection of ants, aphids, bees, wasps, and butterflies. Some are transient visitors; others are longer term tenants. I have to carefully clean the flower heads for the dye pot, otherwise I would be simmering a multitude of spiders … easier said than done as those little spiders look almost identical to the tiny flower heads of the plant. But I persist as a) I vow that no spiders will be boiled on my watch, and b) I’m making flower ink and not spider ink. It’s an important difference to both me and the arachnids.

On the topic of surprisingly named insects (ok, perhaps I jest …), I noticed on my walk to the studio one morning an exotic flash of pink on an evening primrose. At first, I thought it was just part of the flower. But upon closer inspection, it was one of the most elegant—and brightly coloured—little moths that I had ever seen. It turns out that it is (wait for it …) an Evening Primrose Moth.

With all of this in mind, I roll my eyes when I see the big real estate sign up the road from me proclaiming “Vacant Land For Sale”. I think of the far away empires, which, hundreds of years ago, found it politically convenient to describe this country as bereft of inhabitants. Vacant land. Ha! It is anything but.

Early one spring I saw a hummingbird. There was no snow on the ground, but there were also no plants flowering either. It was so early that the local hardware stores hadn’t put out their feeders and still had remnants of winter stuff on the shelves. I fretted on behalf of the hummingbirds … but needlessly so, as it turns out. Hummingbirds have been around for a heck of a lot longer than I have by about a zillion years and of course, have it all figured out.

It turns out that hummingbirds subsist, in part, on the sap that comes out of the holes that woodpeckers and flickers drill into trees. Brilliant! Now I can move on to worrying about something else…

I have always had admiration for these fierce little birds … their speed, their agility, … their relentless intolerance for another bird at the feeder. There’s one that guards “its” feeder from a bush that’s in front of my kitchen window. He seems to be in perpetual moult and is one of the roughest looking of his species that I have seen. He’s always itchy (I’m guessing that moulting is an itchy business) and spends a lot of his time scratching and fluffing his feathers. When he’s not trying to take out another hummingbird, that is.

I’m grateful for the moments that I am able to watch him stretching his miniscule wings, yawning with his big sticky tongue and then zooming out to try to lay waste to any interlopers. But mainly I am reminded that, whether it is found in one of the larger occupants of this land such as a bison, or a tiny little being such as a hummingbird, a massive amount of innate wisdom is encapsulated within this diversity of packaging. To presume to step in and take on the role of either is foolhardy (which is basically what we are doing when we extirpate any of these entities from the landscape). These creatures, large and small, are already the best custodians of this territory. And we need to step back and let the master gardeners do their job.

To extend the conversation, visit the link in our bio: https://www.guelphtoday.com/following-up/nicholas-ruddocks-epic-adventure-3895104

Different perspectives on plants and animals from near and far: a scintillating werewolf saga (because it’s what the world needs right about now) thanks to the most excellent Stephen Graham Jones (self-confessed owner of one too many trucks) … And, because it’s good to have a little glam mashed up with the punk in your life, Sylvain serves up the reality inside the insanity that was the New York Dolls… “Let’s T-Rex the shit out of this, boys!”